“SUSIE, DO YOU KNOW ANYTHING ABOUT . . . THE ACCULT?”: SUSPIRIA
BOB HODGES

“Our Lady of Sighs…her eyes, if they were ever seen, would be neither sweet nor subtle; no man could read their story; they would be found filled with perishing dreams, and with wrecks of forgotten delirium.”

The haunting then horrifying effects of Suspiria are a remarkable achievement. Multiple elements within the film could shatter its dreamwork into either campy silliness or a simplistic sort of stylistic excess. Suspiria is the kind of horror movie where Joan Bennett instructs subordinates to turn off the lights resulting in darkness interpenetrated with a deep red backlighting. The English dubbing is so ridiculous I assumed I had rented a bootlegged copy during my first viewing. Two psychiatrists (Lars von Trier stalwart Udo Kier and Rudolf Schündler, The Exorcist [1973] chauffer) late in the film pontificate about the occult and pronounce it “accult” to Suzy Bannion, the protagonist (Jessica Harper from Brian de Palma’s Phantom of the Paradise [1974]). But Suspiria has an amazing, rhapsodic power. I was lucky that my third experience of the movie came from a 35mm projection in Seattle’s wonderful non-profit Grand Illusion Cinema. Describing the plot of in broad terms feels like an injustice to its experience, so what follows attempts to capture and elaborate on some of the movie’s textured surfaces. 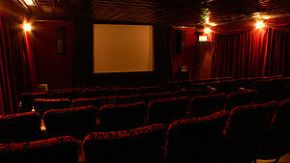 The opening credit sequence offers a sharp contrast: The soundtrack throbs, jangles, and whispers invocations while the director’s (Dario Argento) matter-of-fact voice-over narration introduces Suzy as having arrived from New York to attend the most famous ballet academy in Europe. Suzy hurries through a red and green-lit airport, exits via a sinister sliding door, and struggles to hail a taxi in a torrential wind and rain.

After an uncomfortable cab ride, Suzy arrives at the academy near Freiburg im Breisgau, has a cryptic encounter with the terrified Pat Hingle (Eva Axén) as Pat flees the academy, and a hostile voice on the callboxes refuses Suzy entry. Suzy retreats in her cab, as Pat flees in parallel editing through the Black Forest to the Art Deco apartment building of her friend Sonia (Susanna Javicoli). A shaken Pat cannot explain to Sonia the “absurd, fantastic” occurrences behind her expulsion from the academy. Soon, both women are murdered in gruesome, spectacular fashion: A man’s hand (Argento again) stabs Pat repeatedly, pierces her exposed and still beating heart, and drops her through an ornate skylight with a noose around her neck; the resultant falling debris and glass impale Sonia in multiple places including her face.

The Black Forest in the beginning

The oft-commemorated initial murder (lynching) scene teases audiences with giallo tropes. That term emerges from early 20th century yellow-covered Italian pulp, often translations of Anglophone mystery fiction. Giallo connotes erotic thrillers, and from the mid-60s to mid-70s Italian horror directors like Mario Bava, Lucio Fulci, and Argento developed a specific film form involving a twisty mystery around the identity of a mad killer often represented by his or her (gloved) hand; young, exposed female victims; and a Hitchcockian sense of misdirection and visual flair. In the wake of the murders, the film retains a sense of mystery but returns to its initial, surreal dream logic. 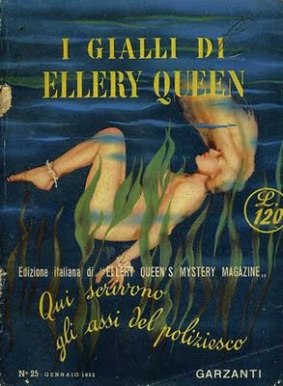 Ellery Queen made scandalous with a Giallo Book Cover

The ballet academy admits Suzy the next morning, but she struggles over details of her living arrangements, diet, and routine with the vice-directress of the academy, Mme Blanc (the final feature role of Joan Bennett, star of Fritz Lang’s The Secret beyond the Door [1948], a major influence on Suspiria), and the strict, suit-wearing teacher Miss Tanner (Hitchcock alumnae Alida Valli). Both older female characters radiate a sinister solicitude and a resentful desire to nurture the independent Suzy and the rest of the academy’s ballet students during the ensuing mysterious occurrence at the school.

After a rejection for her initial flatmate, Suzy allies with paranoid Italian student Sara (Stefania Casini), a friend of the expelled and executed Pat. Sara reveals some of the academy’s darker secrets to Suzy. A silhouette of the academy’s unseen directress sleeps one night outside the female students’ red-lit dormitory and snores diabolically. The academy’s teachers do not return to town after 9:30 supper. They move deeper into the academy’s upstairs. Sara’s revelations climax in the film’s most famous line: “Suzie, do you know anything about witches?”

Daniel (Flavio Bucci) & his guide wolfhound in the Munich Marienplatz

The slow replacement of a lone male serial killer in Suspiria with a conspiratorial coven of witches transforms the film’s gruesome spectacles of violence against women to supernatural literalizing of the film’s elaborate visual and aural senses of occult menace. A possessed guide dog mauls the throat of Daniel, his blind piano player owner in a famous town center that also served as a setting for Hitler’s oratory. Suzy and Sara placidly swim in an ornate pool in the architectural depths of the academy; the camera lurks on the balcony above. Cinematographer Luciano Tovoli’s roving lens provides the audience with these god-like views, and measured yet rapid zoom-ins suggest a malevolent, occult agency. The above-mentioned soundtrack – Italian progressive rock band Goblin’s and Argento’s collaboration – is constant and overbearing. The music threatens to break the fourth wall and mount a diegetic assault on the characters by the dint of sheer volume. Yet, the characters remain oblivious of the jagged pulsations bombarding the audience, a situation absurd yet hypnotically engrossing.

Some critics object to the film’s sensational and graphic depictions of violence against women, literally from the director’s own hand. Their point is understandable but misses some of the subtler textures of the movie. For one, the world of the film is dominated by the presence of women. Hardly any male characters make multiple scene appearances. The film would fail an inversion of the Bechdel Test. The murders in Suspiria all have a throat motif to match the film’s evocative title, which translates as sighs. Also, Suzie emerges as a key model for the strong (but complicated) role of the final girl in slasher films. Her plucking of a feathered dagger from a crystalline peacock statue (a sly reference to Argento’s first film L’uccello dalle piume di cristallo [1970]) in the film’s climax reverses the movie’s earlier obsession with phallic imagery of knives, maggots, pitcher lips, etc. Suspiria helped launch the thousands of stabbings and violations of 1980s horror, but the film demands recognition for its playful genre trickery, all-time classic soundtrack, subliminal occult symbolism, and immersive dream atmosphere. 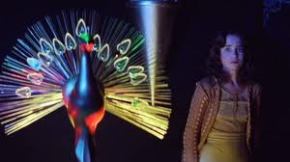 Suzy and the peacock with the crystal plumage

3 thoughts on ““Susie, Do You Know Anything about…the Accult?”: Suspiria”