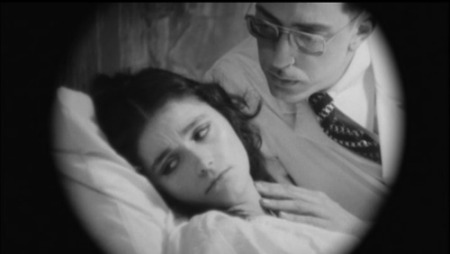 You’ll say Sisters isn’t a crime movie. You’ll say it’s not gritty and raw and real. You’ll say it’s a Hitchcock rip-off. You’ll say blah blah blah. I’ll say: Who gives a fuck? It’s Brian De Palma. And, for me, as much as Scorsese or Schrader or Coppola or Cassavetes, De Palma is the ‘70s. 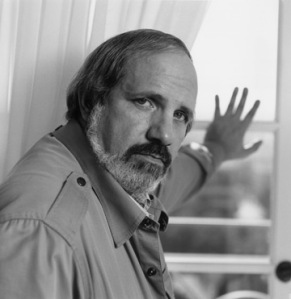 De Palma’s more than that, of course. He’s one of the most versatile filmmakers we have, the same man who made Phantom of the Paradise and Scarface and Mission: Impossible. He’s capable of the highest highs (Blow Out, Carrie), the lowest lows (Mission to Mars, The Bonfire of the Vanities) and everything in-between. Generally, though, even his failures are interesting. (Consider, for instance, the long opening shot of the otherwise not-so-hot Snake Eyes.) He’s made horror pictures and gangster pictures and black comedies and a musical and war films and thrillers and sci-fi. But there’s a certain type of De Palma picture that—if you’re a diehard fan like I am—you think of when you think of De Palma. While Sisters, released in 1973, wasn’t his first picture, it was the first in that strand of weird Hitchcock-inspired noir. (Obsession, Dressed to Kill, Blow Out, Body Double, Raising Cain, and Femme Fatale are the other films I think of as part of the strand.)

Sisters is a strange bird. It stars Margot Kidder, Jennifer Salt, and Charles Durning, but the picture doesn’t belong to any one character. Here’s the short of it: Kidder plays a French Canadian actress/model named Danielle Breton. Danielle meets Phillip (Lisle Wilson) on a candid camera show called Peeping Toms and they go on a date to Manhattan’s African Room (one of the picture’s many what-the-fuck moments). Danielle is hounded by a man she says is her ex-husband, Emil (William Finley), a goggle-eyed weirdo who seems desperate and creepy. Phillip and Danielle leave and take the ferry to Danielle’s apartment in Staten Island. Emil follows them and stands guard outside the building. Phillip and Danielle fuck on the sofa. 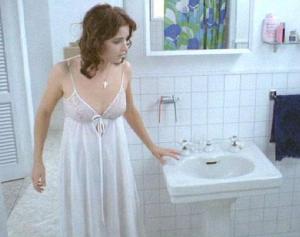 When Phillip returns to the apartment, he sees Danielle sleeping on the sofa and brings the birthday cake over to her with a large knife. She bolts up—it’s not Danielle, it’s wild-eyed and scary-pale Dominique—and stabs him. Phillip crawls to a window and writes HELP in blood on the glass. The perspective shifts to a neighbor across the way, a journalist for the Staten Island Panorama named Grace Collier (Jennifer Salt), who sees what’s happening and phones the cops. Grace has often been critical of the police in her columns and they don’t believe her. 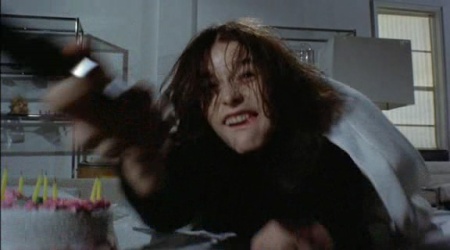 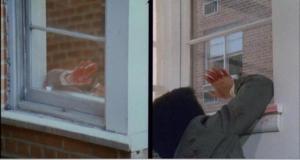 Split screen on Phillip’s murder. From Grace’s POV and in Danielle’s apartment.

Danielle wakes up in the bathroom, dazed. Emil comes to the apartment and finds Phillip’s corpse. Danielle explains that Dominique was there. Emil scrubs away the blood on the floor and window and dumps the body in the sofa bed. The police finally show, and Grace accompanies them to Danielle’s apartment. Blood blossoms out on the back of the sofa, but Grace and the cops miss it and find no trace of what’s happened to Phillip in the apartment. The cops laugh off Grace as a pain-in-the-ass reporter with an overactive imagination and they depart.

With another director, this could all get very frustrating. But De Palma’s playfulness, his shifting perspectives and use of split screens, makes it all a wonderful swirl of weirdness and tension.

At this point, the story more fully becomes Grace’s. She knows what she’s seen and is determined to uncover the truth. She hires a private detective, Joseph Larch (played with wacky joy by Charles Durning), to break into the apartment and find clues of what happened there.

Grace eventually uncovers the truth about Danielle: She was one of the famous Blanchion twins, the first set of Canadian conjoined twins, and she was separated from her sister, Dominique, in a surgical procedure that took Dominique’s life. (That means that the Danielle and Dominique we have seen are somehow one and the same.) Emil was their doctor and the one who performed the dangerous operation. 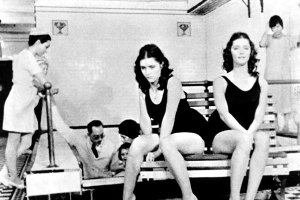 Grace tracks Danielle to the psychiatric hospital, while Larch tracks the sofa—where he believes the body is hidden—as it’s removed from Danielle’s apartment and put aboard a moving truck bound for Canada. Emil finds Grace at the hospital and convinces the other employees that she’s a new patient.

A strange and beautiful dream sequence follows, one I won’t spoil for you. And I won’t spoil the picture’s spiderwebby ending for you, except to say that it’s ridiculous and sublime in that classic De Palma way. What’s often lost is the setting, the way De Palma uses Staten Island. It’s haunted and spooky – the perfect place for this schizophrenic story to play out. 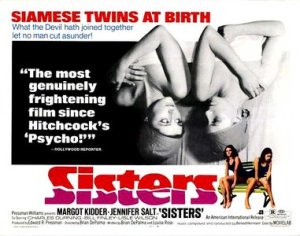 De Palma makes nods to Vertigo, Psycho, and Rear Window and features a Bernard Herrmann score, but the film never feels derivative of Hitchcock. He leaves us unsettled in a wholly original way, building from Hitchcock’s influence, and his dark sense of humor guides the picture’s conclusion to a place that doesn’t feel neat or predictable. It’s not—and could never have been—merely one thing. De Palma shatters genre lines, blending crime and horror and suspense and comedy and surrealism into some potent noir cocktail that must have had an impact on the young David Lynch. Sisters feels different than the other pictures we’ve looked at here at Goodbye Like A Bullet, sure, but it shares with them the common concern that there is no order in the world. De Palma—like Scorsese, Schrader, Coppola, and Cassavetes—gave us a new way of seeing.