Let me sing about a goddamn nutty crime film from 1972 called Prime Cut. My impulse with all of these great old ’70s crime films is to start by saying: “This couldn’t get made today.” And it’s almost always true. Certainly they’d never be made as they are. But this one. Let me say definitively that there’s no goddamn way in hell this movie could get made today. It’s part gangster film, part Midwestern redneck exploitation film, part slippery soft-core film, and part art-house weirdo-fest. It’s a film that feels like it’s parodying a lot of things, but it also takes itself seriously-as-fuck and that’s the genius of it. It’s offensive with a loose plot barely stitched together. It’s hard-boiled camp. But in your darkest (or maybe not so darkest) heart, it’s the movie you’ve always wanted to see. 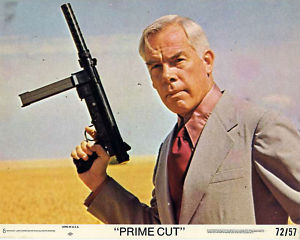 The opening title sequence is aces all the way: credits roll over slaughterhouse action. A worker who is later identified as Weenie (Gregory Walcott) is the center of the scene. He’s sweating and wearing a dingy Kansas City Royals cap. Loungy music plays against shots of grinding and chopping. Weenie plunks a cow in the head with a sledgehammer. We see a man’s bare ass mixed in with the dead cows, about to be ground up. We see meat getting sprayed and pounded. We see a man’s shoe on the conveyor belt. We see hamburger patties formed by machines. We see sad hot dogs getting ballooned into existence. In the final moments of the sequence, we see Weenie filling a special order. He wraps puke-pale hot dogs in butcher’s paper and addresses them to Chicago. A gangster has been chopped up, we discover, and sent back to his boss special delivery.

Girls in pens. “Cow flesh, girl flesh, all the same to me,” Mary Ann says.

The Chicago boss hires enforcer Nick Devlin (Lee Marvin) to go to Kansas City to get back 500 grand of mob money from Mary Ann (Gene Hackman), meat mogul and heartland godfather. Either that or kill him. Mary Ann’s already knocked off three Chicago guys that have come after him to collect, turning the most recent into hot dogs. Devlin and Mary Ann have history (which remains vague), and the Chicago boss is convinced Devlin’s the only person who can deal with Mary Ann. Devlin announces his presence in Kansas City in classic fashion: he tracks down Weenie, Mary Ann’s brother, at a flop house and stomps on his hot dog hand. When he finds Mary Ann soon after, it’s at a livestock auction. But it’s not cattle being auctioned off; it’s young, drugged-up girls being sold into sexual slavery and prostitution. Well-heeled men pal around pens full of naked girls. They scarf down various meat products and slap each other on the back. It’s a surreal scene. Part of the magic of the film is that you’re conflicted about whether or not a scene like this is meant to be merely exploitative or if it’s commenting on exploitation. What I love most, though, is the way Devlin saunters through the weirdness and confronts Mary Ann, who is eating an overflowing plate of tripe. Devlin says, “You eat guts.” 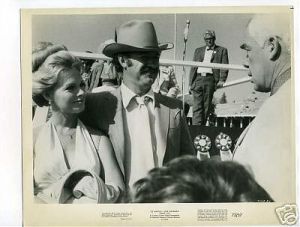 Clarabelle (Angel Tompkins), Mary Ann, and Devlin meet up at the county fair.

Devlin gives Mary Ann an ultimatum and a meet is arranged for the next day, Mary Ann agreeing to pay. On the way out, Devlin takes one of the girls, Poppy (Sissy Spacek), “on account.” A strange father-daughter love story plays out between Devlin and Poppy, who we discover is an orphan raised to be sold like meat by Mary Ann. “Cow flesh, girl flesh, all the same to me,” Mary Ann says. Devlin buys her nice things and brings her to a fancy dinner, where she wears a see-through dress and draws the attention of all the men in the room. The pay-off occurs at a county fair, where one pie-eyed old lady mistakes Devlin, in his flashy suit, for a milk judge. He stops to sample her milk and slaps a first-prize ribbon on her fake cow milk-dispenser. The deal goes sour, as Devlin expected it would. He and Poppy escape the fair and are pursued through a wheat-field by a thresher driven by one of Mary Ann’s goons. In his review of the film, Roger Ebert calls the scene Hitchcockian, and it certainly recalls chase sequences from North by Northwest. But, like so much else in the film, it’s also an absurdist stab at convention. The scene is silly and sincere. After Devlin and Poppy are rescued by his Chicago cohorts, the men having shot down the thresher’s operator, the thresher eats their car and spits it out in a hay bale. No shit.

Devlin and Poppy pursued by the thresher.

Poppy and Devlin in the wheat-field.

Devlin pays a visit to Clarabelle (Angel Tompkins), Mary Ann’s wife and Devlin’s former lover, on a houseboat. Clarabelle, dressed in skimpy lingerie, tries to seduce Devlin, but he just wants the straight dope on Mary Ann. After he refuses her, he undocks the boat and leaves it adrift on the river. Poppy is stolen back by Mary Ann’s goons while Devlin’s out. In the meantime, we’ve learned about Poppy’s sister, Violet (Janit Baldwin), also reared at the orphanage and currently Weenie’s plaything. A storm settles over the city. Devlin attacks, and there’s a fine showdown in the end, Marvin and Hackman dancing through it cheerfully. 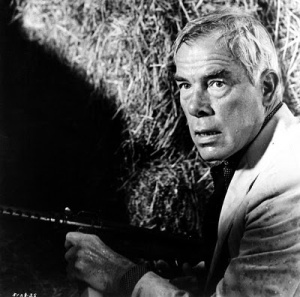 I don’t need to tell you that Hackman and Marvin are badasses and that pretty much everything they touched turned to solid gold. Marvin is stellar here as Irish gang-fixer Devlin: he’s playing the role straight out of the gangster handbook and then subverting it in brutal and hilarious ways. Hackman’s Mary Ann is twisted, balls out awesome, one of the maddest (and strangest) bad guys you’ll ever encounter. He tells Devlin: “You know, my family were Americans when yours were still digging the bugs out of Irish potatoes. [. . .] You think I don’t know this country? I know it. This is my country. I give it just what it wants. Dope and flesh. Something up the arm, something to lick around the belly.” Devlin smacks him in response. In Mary Ann, we see that ultimately the film is a dark study of what it takes to succeed in America. It’s Devlin, Irish-American loner, born of concrete, incorruptible, at odds with Mary Ann, vicious patriot, haywire country boy, the sour fruit of so much corruption.

Sissy Spacek as Poppy, looking up at Devlin.

Spacek as Poppy in her see-through dress.

Pre-Badlands Spacek is stunning as the ravaged and naïve Poppy. I’ve seen at least one review that refers to her character as a “pornographic prop.” But Spacek’s performance shuttles her beyond such easy classifications. In a true exploitation movie, there’d be no room for what she does acting-wise: those wandering eyes, that expressive face, the way that she can take victimhood and turn it into calculating confidence. When, at the end of the film, Devlin helps Poppy free all the young girls from the orphanage where she was raised, we’re aware that she knows how to use Devlin. She’s already, at this point, used him to save Violet. I’d argue that this aspect of the film is not so much about Devlin’s goodness or his code as it is about the compelling and deeply complicated nature of Spacek’s Poppy. Another actress might not have had the guts required to reveal this. Spacek, more than naked in her nakedness, radiates skill. She lifts what could’ve been softcore drudgery to the level of meaningfulness. As in Carrie, you never get the sense that she’s being exploited so much as she’s inhabiting the body of the character. Nothing she does feels cheap. Even in the dinner scene with Marvin, wearing that sheer dress, she gives us two sides: waif and warrior.

So, let’s get a few things straight: Gene Hackman’s character is named MARY ANN. Sissy Spacek wears a SEE-THROUGH DRESS to a classy dinner. A thresher CHEWS UP A CAR. There’s a crazy goddamn scene I didn’t even mention where Mary Ann and Weenie just wrestle for a few minutes. Prime Cut fucking rules. 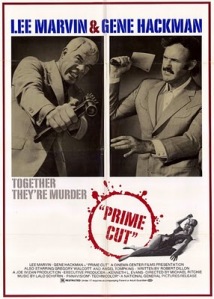